the recovery is around the corner!?

The Worst is yet to come: This applies BOTH to the USA and Europe - ! As a matter of fact, because of the social mattress, the situation in Europe is even worse. The more regulation, the harder it is for society to recover.

"No recovery is possible as long as REAL* unemployment figures are not improving!"

* : direct and indirect government employment is a joke as government jobs are unproductive and

each of them takes away 2 productive jobs in the private sector.

The question never was whether Fannie and Freddie would be allowed to go bankrupt. It was whether the FED would nationalize or bail them out. In the end, what we see here is just the same subtle difference as there is between taxation and inflation.  Both inflation and taxation take the money out of our pockets and nationalization and/or a bailout of the Banks and Financials brings more billions of fiat money created out of thin air and inflation in the system. Or how to keep the flames of hyperinflation alive. 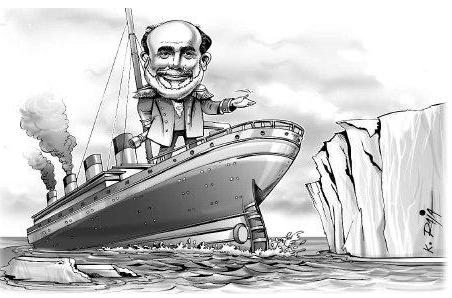 (scroll down for the video clip with English translation)

The markets seem to have forgotten that Bear Stearns was (bailed out) taken over by Morgan Stanley. As of June 1, total borrowings from the FED to the financial system have increased from $ 150 bn to $ 170 bn. Not only were Fannie and Freddie bailed out, but the failed IndyMac has  been taken over by Federal Deposit Insurance Corp (not guaranteed by the Federal Government) and we have probably not seen the end story of Lehman Bros. Earlier this month a financial report of Fortis issued a warning that about 6,000 mid sized American banks were also in trouble. IndyMac could have been one of these. Last Friday there was a run on this bank. Which one will be the next one? Hopefully not mine, or yours...

...and October 2009, they need additional funds from the Government in order to survive! 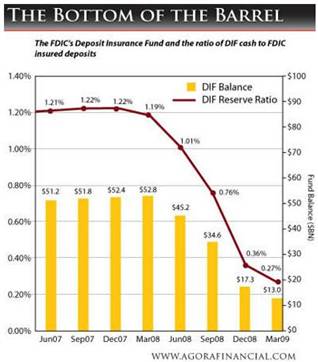 ...and March 2010, the FDIC would be bankrupt if the Government would not have stepped in.

Banking has traditionally been built and was able to survive because the depositors trusted these institutions. Today however because of Fractional Reserve Banking, both the depositor and the borrower now think they own the same money. The least one can say, is that this is rather a dangerous situation. Borrowers are going belly up (CDO subprime, Credit Cards, Mortgages, etc.) taking the money with them. As depositors start to claim the same money because they now also need it in order to survive in this bad economy, the Federal Reserve and Central banks have to print more Fiat Money in order to keep panic away and the system liquid hereby feeding (hyper)inflation.

The same situation is unfolding in the UK and in the EU in a more secretive way. Strange things happened or are happening with Fortis, Soc. Generale, UBS, Crėdit Suisse, Crėdit Agricole, Royal Bank of Scotland, Northern Rock, ..just to name some of them.  We must admit, the leaders of the European countries have a lot more expertise. History has seen plenty of similar problems (Weimar, John Law, Gresham). However the day is coming close where ‘we the people’ will again ‘realize’ the emperor has no clothes.

This first stage of the inflationary process may last for many years. While it lasts, the prices of many goods and services are not yet adjusted to the altered money relation. There are still people in the country who have not yet become aware of the fact that they are confronted with a price revolution which  will finally result in a considerable rise of all prices, although the extent of this rise will not be the same in the various commodities and services.

But then finally the masses wake up. They become suddenly aware of the fact that inflation is a deliberate policy and will go on endlessly. A breakdown occurs. The crack-up boom appears. Everybody is anxious to swap his money against "real" goods, no matter whether he needs them or not, no matter how much money he has to pay for them. Within a very short time, within a few weeks or even days, the things which were used as money are no longer used as media of exchange. They become scrap paper. Nobody wants to give away anything against them. (Ludwig von Mises)

This is where Gresham’s law comes into action: "bad money drives good money out of circulation". In other words, people keep the good money and spent the bad paper money. In Zimbabwe this law was translated in a stock market explosion of + 76,000 %. The advance stalled after Mugabe imposed price controls. Ex post, buying stocks was still better than loosing 9,000.000 % per annum because of inflation. A lot better would have been to keep the savings in Real Money.

We have a paradigm shift. Few see and even understand what is happening.  Personally, I don’t think it will be funny to find  out how it is to be a billionaire in a country like Zimbabwe where a bunch of baked beans cost Zim$ 30 billion.

‘We Failed’: Danish Newspaper Apologizes For Its COVID Coverage https://t.co/dJ5IAORcUb

Gold & Silver are behaving exactly as we called! More on https://t.co/EzBDJmToNO