Governments can print exponential amounts of Money but only so much DEBT can been created.

Public debt to Gross Domestic Product - The Debt is the problem, not the economy. Once public debt is 100% and more of GDP there is a VERY SERIOUS problem. 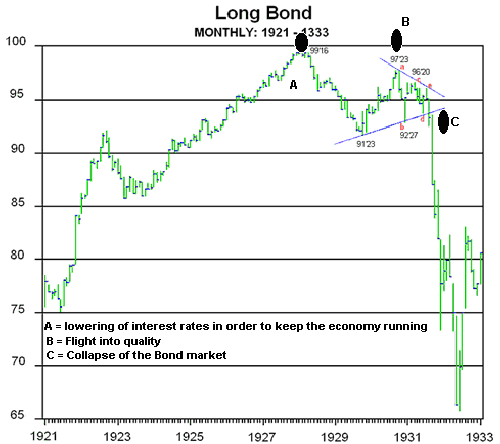 No doubt the Bond Crash forecast in 2009 has started in 2010 and continues in 2011. Interest rates will rise as a consequence of Quantitative Easing and the explosive debt situation. Although we cannot compare the actual situation with the 1920-30’s (in those days the creation of money and credit was somewhat limited by Gold), I am convinced we shall see a similar evolution and that because of DEBT the Bond markets markets will crash in sequence.

This is absolutely so for in the EU as the only way to short a currency of a member state is to short the Treasuries (a Treasury is an option to buy the local currency which has stopped existing since the introduction of the Euro) of a specific country (ex. Greece). Treasury bond yields and the yield curve in general are likely to rise sharply from 2010 on.

The Greek scenario is a good example of what will spread through the Western World in a domino style.See how FAST Bonds dropped once the down wave was been initiated (example Greece). It literately wiped out fortunes in less than 8 months' time. This is how it was during the last Great Depression: note the flight to security like we saw for the American and German Treasury bonds recently (2008, 2011 - peak on the charts). [note the flight to US Treasuries also had a temporary bullish impact on the exchange rate of the US Dollar].

Authorities can manipulate interest rates in the short run and try to delay a rise in interest rates only for so long. In the end when the markets start to distrust the actions of Authorities because the promised economic revival doesn't happen they massively start to sell/short Government debt and hereby punish the wicked politicians. The cleansing action these feared so much irrevocably destroys the misallocated funds and so prepares the economy for a new boom. To receive zero percent interest after loaning your money to the government for one month is ridiculous. And this is what most people are knowingly and unknowingly doing and today Treasuries/Bonds are in the biggest bubble ever.

Government typically follows the 'Turkey pattern'. They pretend to care for the people during the 1000 first days but the next day they are slaughtered. If they can't inflate away the debt, they call for a debt moratorium. In Belgium 'the Unified debt-1945' is know of all financial people. During the Great Depression, all the conservative investors who held Bonds lost all their savings as Bonds were either called in under the Moratorium (Europe) or as the Dollar was devalued by 40% by Roosevelt.

The reduction in interest rates which we have seen in the 1990's in Japan and more recently in Western economies should theoretically stimulate demand to reduce deflationary pressures. This however is not happening. Monetarism does simply not work. Investors are buying dangerous Government Debt yielding less than safe Real Assets (Stocks)!? Many who claim that there is justification for today's bond yields are the same folks who claimed back in 2006 that home prices had never before in history declined on a national level and any talk of a bubble in real estate was therefore nonsense. Many of them are also the same people who assured you in the year 2000 that prices of internet stocks were fairly priced.

Rising interest rates are likely to be symptomatic of the coming cash crunch. The revenue streams of the banks will dry up and the industry will end up in an even worse shape. Note how in from 1973 to 1980 interest rates rose to peak in 1981 and the price of GOLD rose and peaked at the same time. Or how this proof you have a 'Problem' if you are holding on to Bonds NOW! The irony of the story is the bond crash always happens when the public is holding the bulk of the countries' debt.