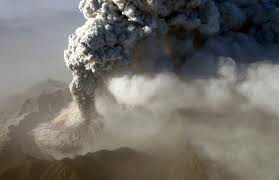 The volcanic debris from several Russian volcanoes has weakened the Arctic Oscillation making it negative. This has allowed the polar air mass to surge south and push the cold and wet impact of the strong Pacific La Niña further south than usual in North America.

In April 2010, an obscure Icelandic volcano, Eyjafjallajökull, completely disrupted European air traffic patterns. At its peak, the troublesome cloud of volcanic debris stretched from Canada to Russia and its impact was felt worldwide.

In December 2010, obscure volcanoes on Russia's Kamchatka Peninsula, totally disrupted North Hemispheric weather and air traffic patterns. Icy weather plunged deep into the Northern Hemisphere, from the US and Canada through Europe and Asia. (In the process, it chilled the UN Climate Change Conference in tropical Mexico.) California's Mammoth Mountain was buried in 9 to 13.5 feet (2.7 - 4.1 meters) of snow while New York was buried in 2 feet (60 cm) of snow. Twice Florida crops were hit with freezing temperatures. This record-breaking weather will affect global crop production and food prices.

The cooling effect of the Russian volcanos was enhanced by the current La Niña. This year's La Niña began early this summer and has been warping global weather patterns for the past six months. In summertime, this meant hotter weather .In winter it creates colder and stormier conditions.

La Niñas occur when unusually strong tropical Trade Winds blow the sun-warmed surface waters of the Pacific toward the west. As a result, the western Pacific is warmer than average and the central and eastern regions are cooler. When the

central and eastern waters are more than 0.5°C (0.9°F) cooler than normal, the phenomenon is officially declared a La Niña. As the event continues, the cool water expands north and south along the western coastlines of North and South America.

Alaska's Aleutian Islands to the southernmost tip of South America. NOAA's most conservative estimate is that these cool waters will remain in place for the rest of this winter.

Part of the reason this event is so strong is that the Pacific has entered the negative phase of the decades -long Pacific Decadal Oscillation. This ocean-wide event exaggerates the tropical cooling in the east and warming in the west.

How do you call somebody spending the money of the others ? A bloody idiot of a politician !