Authorities can manipulate interest rates in the short run and can delay a rise in interest rates only for so long. But this is the only action which is possible. The world financial markets finally decide and dictate Interest rates. What we are about to see is that Long term interest rates will push up short term rates. The resistance level is 4,60% and it is in the process to being broken. Notice the significance of the 4.0% level. A huge reversal pattern is underway. The critical right side resistance level has been 3.9%, well defended. The left side critical resistance level has been 4.0% and 4.1% from late 2008. The trend is up, accentuated by the stochastic index since October. Watch a breakout above the important 4.0% level. Note that the EXECUTION level of 6% is slowly but surely coming down to 1% and ZERO% (the execution level for Japan is 1% - March 2013) 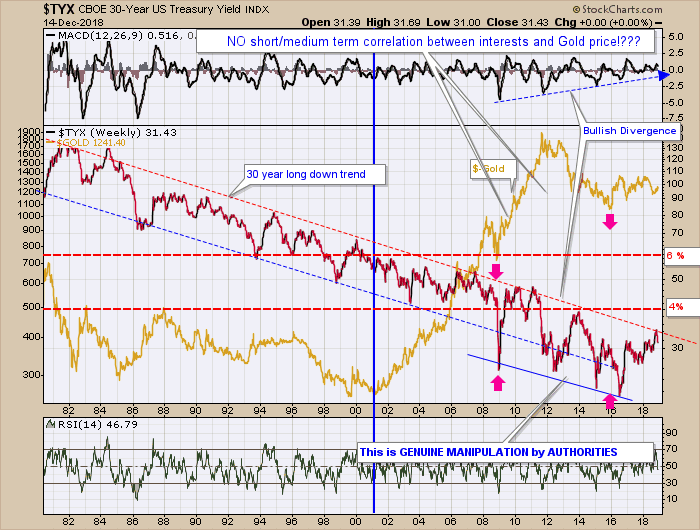 Huge borrowing requirements: US treasury borrowed over $1 trillion in the year to September 2008; it is expected to borrow close to $2 trillion in the year to September 2009. That’s 13% of US Gross Domestic Product. Not all of this is deficit; about $500 billion is refinancing and another $500 billion is for bailout schemes, some of which the US taxpayer may eventually see back. Still, in terms of GDP that’s far more debt than the US capital market has ever been asked to absorb, other than during World War II. At some point, “crowding out” must occur; we certainly cannot assume that Asian central banks will want to take the entire load, at interest rates less than zero in real terms.

(Hyper) Inflation.The Fed appears to believe that the current recession will bail the United States out of its inflation problem. The example is given of Japan in the late 1990s, after which the Fed explains that they will avoid the mistakes of the Bank of Japan, thus preventing damaging deflation. Actually that seems to be wrong on two counts. The main mistake in 1990s Japan was not monetary but fiscal; government spending was allowed to expand inexorably, producing ever larger and larger deficits. That mistake appears to be only too likely to be repeated here. The difference is that the United States currently has a 1% Federal Funds rate and 5% inflation, the approximate opposite of Japan in the early years of its slump. With M2 money supply (the one the Fed will divulge) up at an annual rate of 18.3% since the beginning of September it seems likely that inflation will accelerate – as it did in the recessions of 1973-74 and 1979-80.

Rising real rates of return. The yields on Treasury Inflation Protected Securities have already risen from just over 1% to nearly 3% since the beginning of 2008. Given the excess of bonds coming to the market, it makes sense that real yields should rise. That in itself suggests that conventional Treasury bonds are hopelessly overvalued – with the 10-year TIPS yielding 2.82% and the 10 year Treasury 3.78% (yields as of November 02 are even lower), the implied rate of US inflation over the decade to 2018 is 0.96% per annum, for a total rise in prices by 2018 of less than 10%. If you think that’s likely, I can get you a deal on Brooklyn Bridge!

Thus Treasury bond and other prime bond yields can be expected to rise sharply at some time in the future. This will cause losses to their holders. To the extent that such holders are foreign central banks, the United States probably doesn’t need to worry. Foreign central banks have been gentlemanly holders of US debt through periods such as 2002-08 when the dollar has depreciated; a rise in interest rates simply gives them another way of making a loss. Personally if I were the Chairman of the People’s Bank of China and Treasuries had lost me the kind of money they have in the last five years I’d probably declare war on the US, but fortunately central bankers are a phlegmatic and tolerant lot!

However domestic holders are a more serious problem. To the extent that pension funds have losses on their holdings of bonds, they will need to raise contributions; to the extent that insurance companies have such losses they will need to raise premiums. Some entities will be hedged, but by doing so they will have simply transferred the interest rate risk to somebody else; by definition of derivatives the total outstanding derivatives position must be zero, however large the individual positions taken.

Assuming the $30 trillion state, mortgage and private corporate debt outstanding has an average duration of 5 years, a fairly conservative assumption, and neither the shape of the yield curve nor the premiums payable for risk alter significantly by the end of 2009, a 1% rise to 4.74% in Treasury bond rates by December 2009 would cause a total loss to investors in the $30 trillion of Federal, agency, mortgage and prime corporate debt of 3.9% of the debt’s principal amount, or $1.17 trillion. Not as bad as the credit losses.

However once rates start rising, they are likely to rise much more than 1%. To cause a loss of $3 trillion, the same as the estimated credit losses, 10 year Treasury bond yields would have to rise to 6.43%. Hardly an excessive assumption; 10-year Treasuries yielded 6.44% on average during 1996, at the beginning of the Fed’s money bubble, in which year inflation was 3.4%.

More extreme moves are certainly possible. In 1990, 10-year Treasuries yielded an average of 8.55%, while inflation in that year was 6.3%. A rise in the yield curve to an 8.55% 10-year Treasury yield would cost investors $5.06 trillion, almost double the credit losses from subprime and its brethren. Should we revert fully to the days when Paul Volcker was Fed Chairman and get the 13.92% 10-year Treasury yield of 1981, a year in which inflation was 8.9%, the cost to investors from the interest rate rise alone (we can assume a few additional bankruptcies, I think) would by $9.33 trillion, about two thirds of the current value of common stocks outstanding and more than three times expected credit losses.

One can debate the probability of the various outcomes above. Inflation is already around 5% and is unlikely to drop much, so the 1996 estimate for the peak 10-year Treasury yield would seem low. On the other hand, while inflation could well reach 8.9%, it seems unlikely that we will need to push Treasury yields quite up to 1981’s Volckerian levels, at least not within the next year. So the 1990 estimate is perhaps the best, involving a loss to investors of around $5 trillion or a little over. Such a loss will produce fewer calls for bailouts than the $3 trillion credit losses, but just as much economic damage, albeit much of it unnoticed by the general public.

TO RECEIVE ZERO PERCENT INTEREST AFTER LOANING YOUR MONEY TO THE GOVERNMENT FOR ONE MONTH IS RIDICULOUS.

Government typically follow the 'Turkey pattern'. They pretend to care for the people during the 1000 first days but the next day they are slaughtered. If they can't inflate away the debt, they call for a debt moratorium. In Belgium 'the Unified debt-1945' is know of all financial people.

During the Great Depression, all the conservative investors who held Bonds lost all their savings as Bonds were either called in under the Moratorium (Europe) or as the Dollar was devalued by 40% by Roosevelt.

The reduction in interest rates which we have seen in the 1990's in Japan and more recently in Western economies should theoretically stimulate demand to reduce deflationary pressures. This however is not happening. Monetarism does simply not work.

Many who claim that there is justification for today's bond yields are the same folks who claimed back in 2006 that home prices had never before in history declined on a national level and any talk of a bubble in real estate was therefore nonsense. Many of them are also the same people who assured you in the year 2000 that prices of internet stocks were fairly priced.

Rising interest rates are likely to be symptomatic of the coming cash crunch. The revenue streams of the banks will dry up and the industry will end up in an even worse shape.

Note how in from 1973 to 1980 interest rates rose to peak in 1981 and the price of GOLD rose and peaked at the same time. Or how this proofs you have a 'Problem' if you are holding on to Bonds NOW! 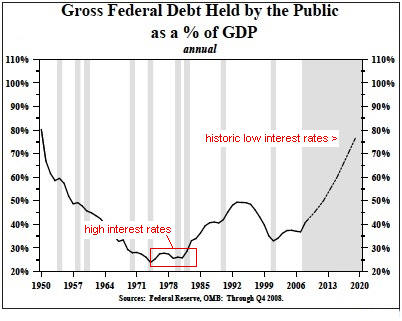